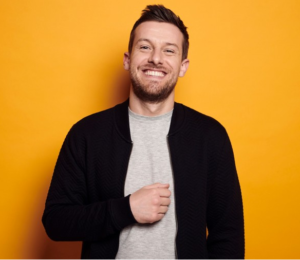 Stand up Chris Ramsey is going on tour in 2020 and it’s his biggest tour to date – Chris Ramsey 20/20. The critically acclaimed stand-up and star of The Chris Ramsey Show, and Stand Up Central will be touring for over 40 dates from from 26th March to 5th December 2020. Chris has appeared on I’m a Celebrity: Extra Camp (ITV2), Virtually Famous (E4), as well as performing on the Royal Variety Performance (ITV), Live at the Apollo (BBC1) and as a regular on Celebrity Juice (ITV2). Chris and his wife Rosie Ramsey recently launched a brand new podcast series – ‘Shagged. Married. Annoyed‘ which has now been downloaded over 4.5 million times.  This new tour follows the hugely successful sell out tour, Chris Ramsey Live 2018: The Just Happy To Get Out Of The House Tour.

Check his website to see if he’s coming to a town near you – and don’t forget Chris is an excellent choice for awards hosting roles or stand-up comedy sets after-dinner. Drop us a line to find out more. Check out some testimonials from previous events on his profile page. Don’t forget to follow Chris on Twitter for the latest updates – and get news from across the industry from @Livecomedy.

Enjoy this new clip from the genius impressionist Jon Culshaw, showing him parodying the The Sunscreen Song As Donald Trump. Jon is one of our most experienced and popular corporate comedians. Jon is a fantastic awards host and performs after dinner cabaret sets. He can also turn his hand to all manner of branding events and private parties. Drop us a line to find out more – and don’t forget to follow him on Twitter.

It’s been another busy week for the Corporate Team at Avalon HQ. We’ve had Rose Matafeo and Ed Gamble do Q&As for trendy media audiences and Paul Chowdhry hosting an awards for a whopping 1600 at the Royal Albert Hall. Chris Ramsey also brought the house down in the round at a hair and beauty conference. Jon Culshaw wrapped up the week with a fantastic ‘In Conversation with…’ loaded with impressions for delegates from the logistics industry.

Here is a snippet of some of the audience reactions, as told by social media.

Thank you to the brilliantly funny @Rose_Matafeo for coming in to tell us all about everything she’s loving on YouTube! We loved having you @GoogleUK #ThisisMyYouTube pic.twitter.com/jBQnabydGo

So great to interview the brilliantly funny @Rose_Matafeo today for #ThisIsMyYouTube @GoogleUK.
We talked k pop, Chinese cooking & choreography & there was even some dancing involved.
If you haven’t seen Rose’s award-winning show #Horndog yet GO SEE IT. pic.twitter.com/hYX8l89HnI

Good luck to everyone at the 2019 British Insurance Awards! #BIA2019 @InsuranceAge 🌟🌟🌟 pic.twitter.com/SXjJBaetyz

We came across a Twitter thread yesterday that really resonated with us.

Written by comedian Ashley Blaker (whose permission we sought to reproduce this thread), it describes every comedian’s worst case scenario when it comes to a corporate performance.

2/9 The whole restaurant had been booked for around 50 mostly middle-aged north London Jews. After about an hour or so my wife’s uncle stood up and said they’d hired a comedian to perform. I didn’t know in advance but being a TV comedy producer at the time I was very interested.

4/9 He tried his best without a mic or a stage and I could see he had some very good material but no one was interested. In fact the audience behaved quite appallingly and used him for sport, heckling and trying to disrupt him.

6/9 My wife’s uncle was angry, not with his guests but with the agency who provided the comedian and said he’d be calling them to demand his money back. I said I could see he was good and that it wasn’t his fault the environment was completely wrong.

8/9 I booked the comedian on a TV show I produced a couple of years later and I reminded him about this gig. His face went white as I think he’d blocked it out. I don’t blame him. These gigs are horrible.

9/9 The comedian’s name is @iamjohnoliver and he’s now one of the biggest comedy stars in the US. The idiots in the restaurant just didn’t realise it.

It seems impossible that a comedian as talented as John Oliver could struggle in front of any audience but, sadly, lots of comics who have dabbled in the world of corporate and private performances have at least one similar story.

With that in mind, here are some top tips about making the most out of your comedian at your next corporate event, from the combined feedback and wisdom of the whole Avalon corporate roster!

It’s the fantastic comedian and impressionist Luke Kempner with another episode of Alternative Love Island! Learn more about Luke and what he can bring to your corporate event here.